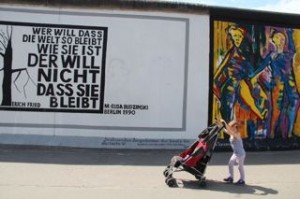 Yesterday morning began at 5:20a.m. for me, the sun was already up and I couldn’t stay in bed(though the beds where we’re staying really aren’t that bad). 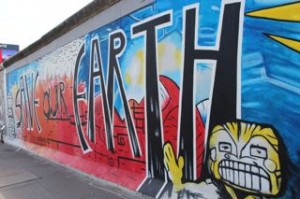 It was this morning that it actually began to hit me that I was in Berlin. And then, that I would be here(hier) for two(zwei) more weeks. (And then, back again for Jack White June 26th…after traveling Europe for near 4 more weeks!) 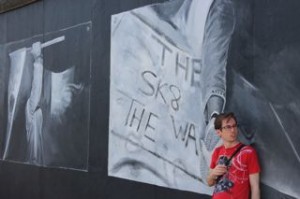 By 11, we were in Alexanderplatz, where we began our tour with Fat Tire Bike Tour. Sam, our guide, told us a bit of the history of Alexanderplatz, about how it was the show-off square of East Berlin back in the day. The TV tower is the tallest building in Germany and its design is based off the Sputnik Satellite(which was much, much smaller). 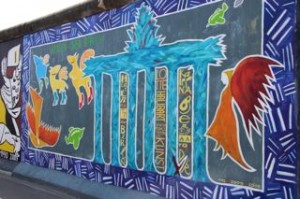 Ironically, the Park Inn has the highest Casino in Europe now, but every single room was bugged by the Strasi at one point. Also in Alexanderplatz was the only place to get a travel visa, that is if you’d never ever said anything against the gov’t. But even if you did get the visa, the only direction you could go was East. 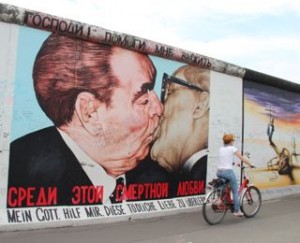 We biked to a different part of what’s left of the Berlin Wall, passing Cafe Moskau and Karl Marx Buchhandlung on the way. 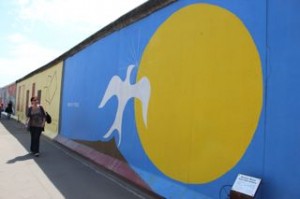 We got a bit more history in us before walking along the Wall towards the O2 World(definitely wasn’t there when the Wall was built), but the wall was not the original artist’s work of 1990, it was repainted in 2009 — not by the same artists though, as they only offered the artists 1000 euros each to come back and repaint. 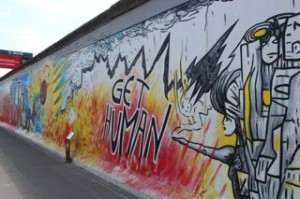 A lot of people were gathered around one particular painting, that of the famous fraternal kiss. “My God, help me to survive this deadly love.”

We stopped for lunch at this German place(can you believe the option of pizza was suggested?!) and I had Rye Spatzel Bauerschwein, aka rye noodles and pork. Sehr, sehr gut. 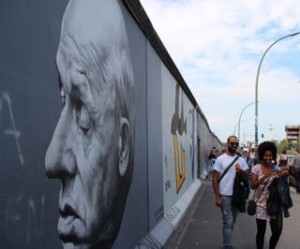 We went to Tempelhoff, which has been threatened with Condo-construction, and squatted on three times to save the park. On the eve of the what was to be the hugest protest ever to save it, the government declared “It’s a park!”, figuring once that many squatters got in there, how would they ever get them out? 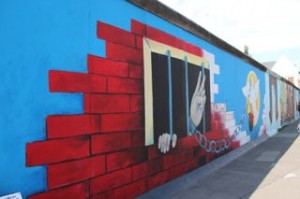 Perhaps it was a tool to delay decision, but now that Berlin has had a taste of Tempelhoff, it’d be difficult to take away for condo-rising. 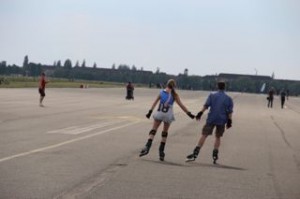 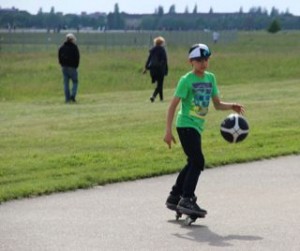 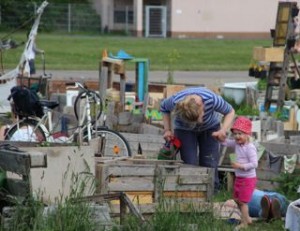 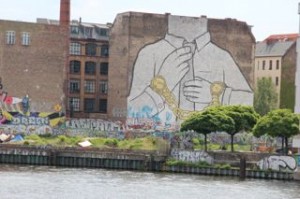