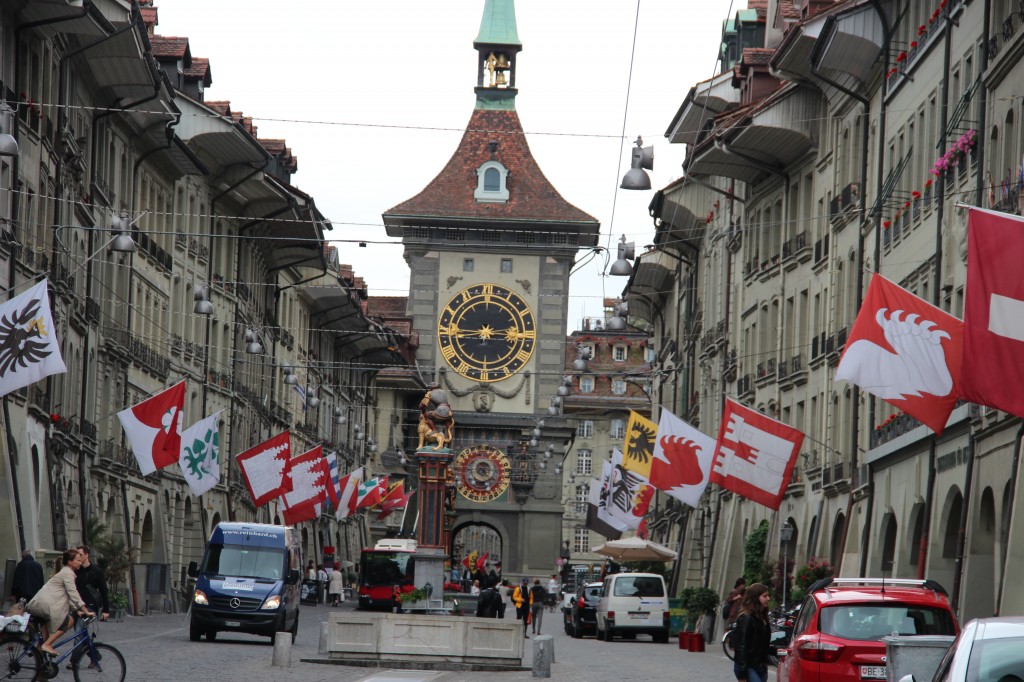 A friend I met in Death Valley two summers ago(while road-tripping along I-10 West, then back East…perhaps a different story…) met us at the station in Bern. We dropped our bags off and went out to a bar for sandwiches and beer. One thing we learned this night, was that here in Bern you don’t say “Danke,” you say “Merci” because there’s a town pretty near where they speak Francais(swirly thing below the ‘c’!). First, though, we had to get Swiss-Franks out, Euros don’t help too much here. And it’s true, what they say, about how Switzerland is expensive. It is. 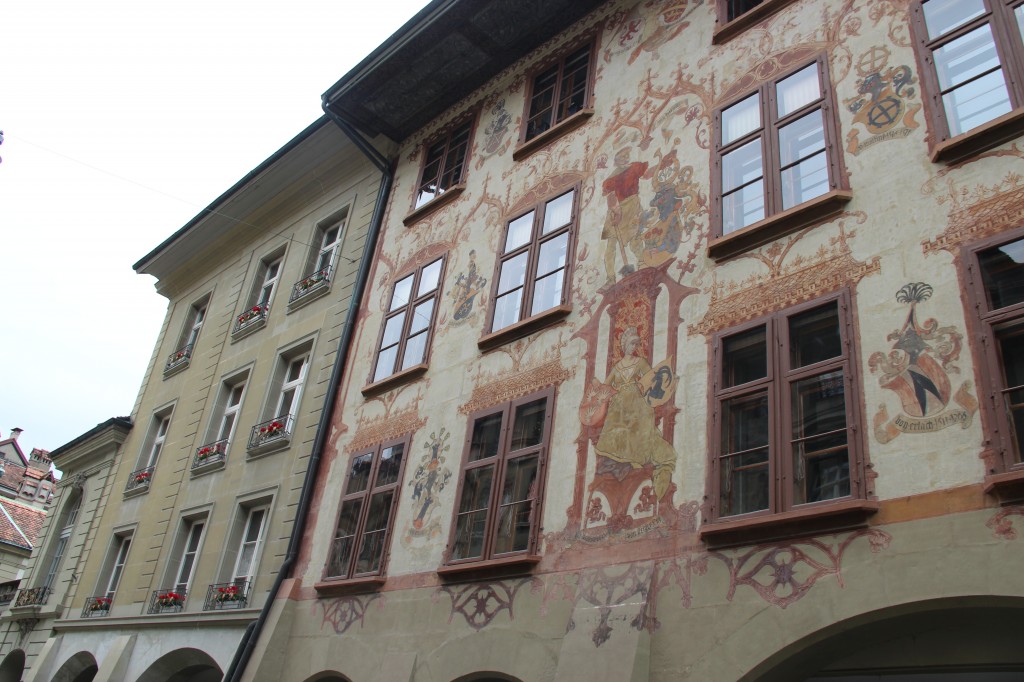 The next morning we awoke and walked all over town, from the Parliament building(great view from there) to the Barengraben(bear pit…the ‘a’ is supposed to have two little dots over it…), where we ate delicious traditional style Swiss meals(mine was like cheesy hash browns with bacon and apple-puree) and drank Marzen(again—two little dots above the ‘a’!) – beer that was sehr gute. The city Bern was actually named after the bear, as it was the first animal the people who came here saw. And now, you’ll see symbol of the bear everywhere in town.

By request of Bailey and I, we walked by the statue of the giant eating a baby. We were curious, of course, when we read about it in this huge book of Europe Bailey’s been carrying around. It was as strange in real life(in the middle of the street) as it sounds in text.

We went back to the apartment to catch the Greece/Czech Republic game, the Euro cup is going on right now – it’s a big deal. Czech won 2-1.

We went out for doner(two dots above the ‘o’!) and caught some of the Poland/Russia game – the tension between the opposing fans was fierce, check it out:

After eating, we walked to the Reitschule, an underground totally graffiti’d bar with a few other things including a women’s only club, a cinema, and a really f*ked up bar, apparently. It’s right by the train station. Reminded me of Tacheles in Berlin, but this isn’t as huge nor has it gotten as much publicity(at least its not streaming with tourists during the day time), but people live at the Reitschule, too, at the top. We got a beer from the main inside part, and then went off to a side room. The Poland/Russia match was on. By this point, I wasn’t surprised, and I was actually interested. It’s cool how the various nationalities come together in this sport, and how much belief is invested. The match ended(1-1) and we headed back.

At this point, we realized how late we waited in finding hostels in Paris. We scrounged the internet and found nothing. It wasn’t till morning we booked our hotel for the night—finding a roof last minute sucks, we’d been spoiled by having such friends abroad to let us stay with them so much. But we got a place booked, and headed to the station, where I spent my remaining Swiss-Franks on donuts and a cheese sandwich.

On the train from Milano to Bern, with Bailey this time!!

We just passed a castle across a lake! Mountains all around us, going through a tunnel right now actually(so above us, too..) Its so green here.

Out of the tunnel. A teal crane! Brighter than Venice canal water, for sure. And a green one! Wow, and to think all I see back home are plane old golden yellow.

Man(another tunnel). And it smells…horrid. Bailey and I decided it’s the giant’s septic system.