An article for WUFT:

Today concludes Justice Week in Gainesville, Fla. It was five days of events to increase awareness about human trafficking — both domestic and international.

I attended the “Human Trafficking Symposium: The Price of Sex” in the Rion Ballroom on UF campus on Thursday. Frank Williams, Sherry Kitchens, William Crews, and Mac Heavener spoke about the realities of human trafficking right here in Gainesville.

When people think of human trafficking, they think of “Taken.” Many don’t even acknowledge that it’s happening right in here in our little town.

U.S. Attorney Frank Williams called Gainesville out. It’s happening here, he said, because there’s a DEMAND for it here. (A DEMAND for SEX with YOUNG GIRLS.)

In case you aren’t well-versed in human trafficking, it is essentially this: A human being selling another human being.

He said runaways often get swept up by a pimp within 48 hours of leaving home. If the pimp has other girls or women, he might threaten to beat one of them if she doesn’t do as he says. He explicitly used the words “malled or killed.”

They especially focused on men paying to have sex with young girls. Recently, a UF student was caught in a sex sting for trying to meet with a 14-year-old girl.

Gainesville is right off I-75, and surrounded by agriculture. These could also factor in to the amount of human trafficking here.

Assistant U.S. Attorney Mac Heavener spoke of the high rate of human trafficking in Jacksonville, Fla. He said some illegal immigrants will be brought here with promises of a waitress job and instead are manipulated into thinking they have all this debt to pay and only one way to do it. They are scared of authorities, of course, and don’t have anywhere to turn.

In one example Heavener gave, a woman had sex with 15 men a night for $20 each. A customer ended up calling because he felt bad for her.

Sherry Kitchens, who works with victims here in Gainesville, tried to explain why the victims don’t “just leave.” Aside from the threats, there’s a lot of manipulation involved. Girls have often run away from their families and now their pimp has created a sort of family-replacement. He’ll provide the food, shelter, everything they need and make them feel like they really can’t get on without him. Often, they’ve been so worn down that they feel worth nothing — he’s the only one who will see any value in them anymore.

A girl from the audience walked up to the podium. She wasn’t a scheduled event. Her name was Kelsey, and she felt she should share her story. She was abused for five years from when she was 7 to 12. She said no matter how much therapy she could go to or help she could get, there was nothing that could fill that hole. There was no day that she didn’t think about it. That’s why, she said, the focus needs to be prevention. So this doesn’t happen to more children. 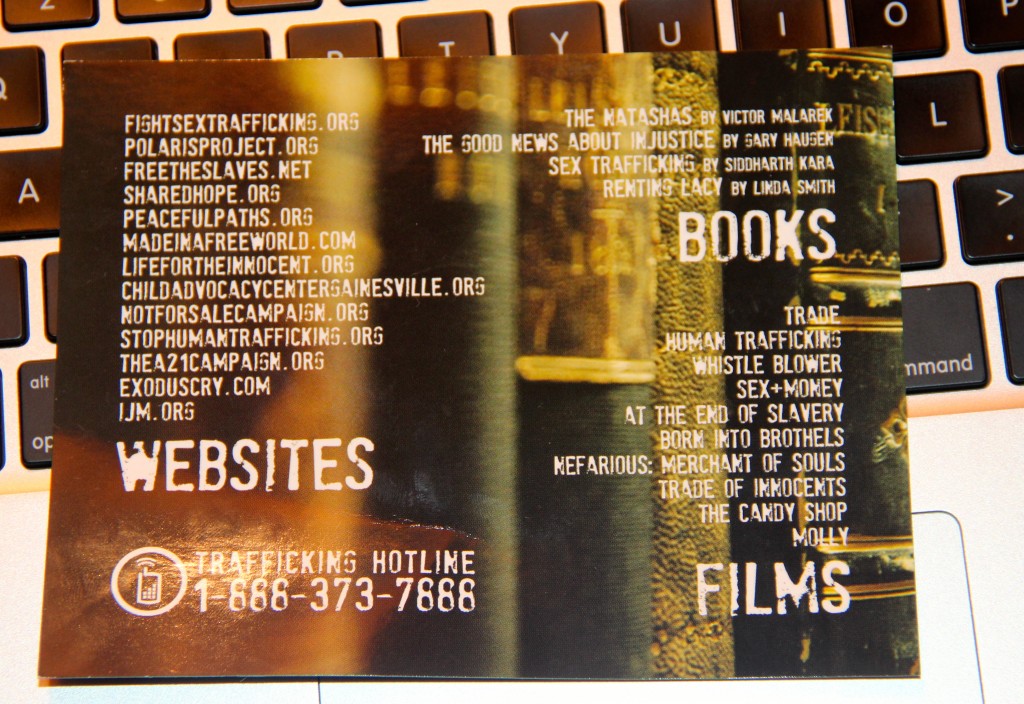 It’s the largest tree of life ever created. It’s an accessible database exploring the interrelationships of mammals from the age of the dinosaurs up to the mammals that walk the Earth today. Yep, I wrote about science again. Yay! See the full article here:

I love science, especially space! So it was pretty freakin’ cool to write about Asteroid 2012 DA14, due to pass between our satellites and the Earth in a week. See the full article here:

What an awesome day in the news facility! I got to read articles, choose a few to package together, and write a little blurb to lead people in.