I arrived at the Immigration Office late in the morning on a Monday, so I knew there was a good chance I wouldn’t be able to take care of getting my residence permit that day. The hours are 08:00 to 12:00. The woman at the front desk told me that they open at 08:00.

I thought 08:00 was a bit extreme, but if I arrived before 09:00, at least, I’d be fine. With three more hours until close, how could I not be? I arrived Tuesday morning shortly after 08:30. A friend of mine was already there. As I’m in the elevator on the way up to the fourth floor, she said they just put a “CLOSED” sign on the number dispenser. They would not be seeing anyone who didn’t already have a number.

I decided to wait it out and see what would happen. There were two small waiting rooms. All the seats were full, so people were sitting on the hallway floors. We were, too. Eventually, a couple of seats opened up and we snagged them. A man who had to go, for work or another daily obligation, gave my friend his ticket. His was earlier than hers. She gave me hers. 037. It was around 10. Around noon, my friend went in. She came out empty-handed. She didn’t get it, and the woman was mean and rolled her eyes at her. I thought since I had everything the university told me to provide, and understood a bit of German, I’d be fine. Well, she was nicer to me, but no cigar. Wednesdays they are closed. 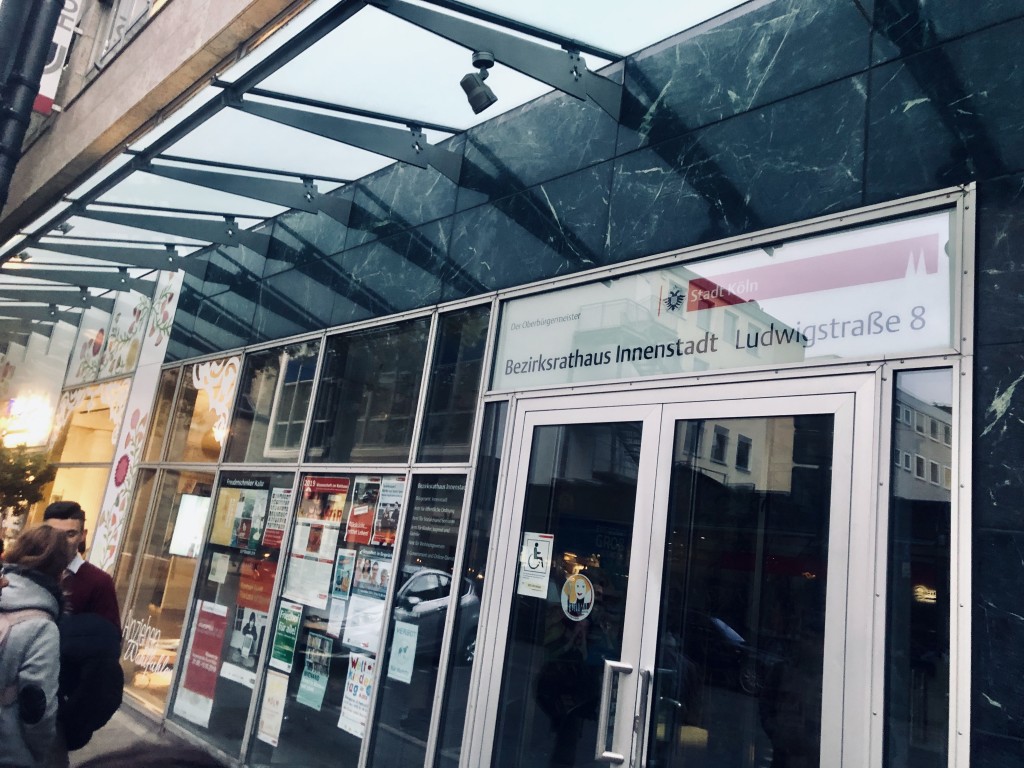 I arrived at 07:14 on Thursday morning and was seventh in line. The doors opened at 08:00. I am not going to go into detail about the events that followed between going up the elevator and getting my number (09), but it was not a good look on humanity at all. Looking back, I would have attempted to organize a line. I wish that the people who work there did. In the mad rush up the four floors to the number dispenser, it didn’t matter how early you got there, it only mattered that you were aggressive. I let my friend  who helped me on Tuesday go ahead of me (bumping me to 08), and a woman who was not there early anywhere near as early as us somehow got up there, too (bumping me to 09).

So here is what you actually need for the Immigration Office:
1. Your number. (Get there at 07:15, and it will go fast. Get there at 7:30, and you could wait for hours.)
2. Your passport.
3. Your insurance exemption letter that says your insurance works for Germany.
4. Your AirBnB receipt or renter’s agreement. (You must have something printed out. Digital copies are not accepted.) The university will say that we need our City Registration confirmation, but this does not suffice.
5. A “biometric passport photo” that is 35 x 45 mm. On photo paper. Cut out. (Note: this is not the same size as a U.S. passport photo.) You can get this done at a Copy Shop. I went to one right by Chlodwigplatz, a stop from TH Köln.
6. Stamped certificate of university enrollment. (The letter that you received when you arrived so you could use public transport.)
7. Proof of sufficient funding. Currently, you need proof of 853 euros for each month you are staying in Germany. I printed a balance letter saying that I had an amount in excess of the amount I needed. If you have Charles Schwab, this letter is easily accessible online. However, it is not likely to be in the correct currency. Do the calculation and write amount of euros your currency equals on the letter.
8. The application, if you have received it before. Plus, the information that will go into the application such as your address, your German phone number, your insurance information. Basically, the things you probably have accessible in your wallet or on your phone.

I brought these things in when my number was called. I was told I need to pay 50 euro and I was ready to pull it out of my pocket. (Note: for my friend, it was 56 euro. Bring excess.) 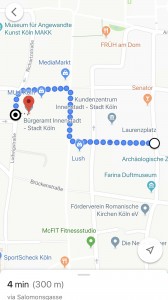 But, the cash register is at City Registration. So, she held onto my passport, I took the blue form she gave me around the block from Ludwigstraße to Laurensplatz to the person at the desk entitled “Kasse” and paid the 50 euro.

I went back to Ludwigstraße, went up the elevator, knocked on the person’s door who was helping me, and waited. She came from the outside, said “Komm rein.” I followed her in and handed her the blue receipt. She handed me my passport complete with the residence permit inside.