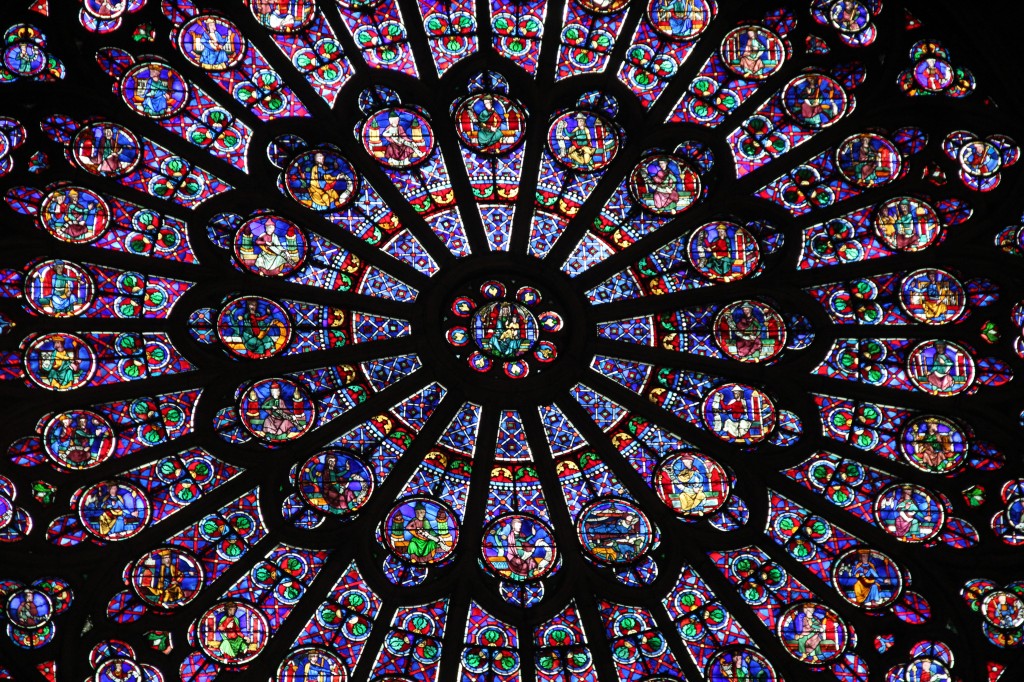 Of the cities I’ve encountered, Paris comes closest to New York. Its huge, you get places by metro, lots of shops of fashion and sweets, and lots of tourists but more locals. In Paris though, everyone was so nice. We’d heard wretched things, that the French hate Americans, for example, and that they’ll be dicks to you if you try to speak English at them. On the contraire, anytime we asked for help in getting somewhere the people were very friendly and we had no problem at all.

We checked out of the Ambriot Hotel to  stay at a hostel for the next two nights. After we dropped our packs, we found a cute little place nearby, called “Miss Lunch” where we enjoyed delicious brie and meals I can’t pronounce the names of. Bailey got something with peppers, and I got something with pork. Delectable enough to mention. 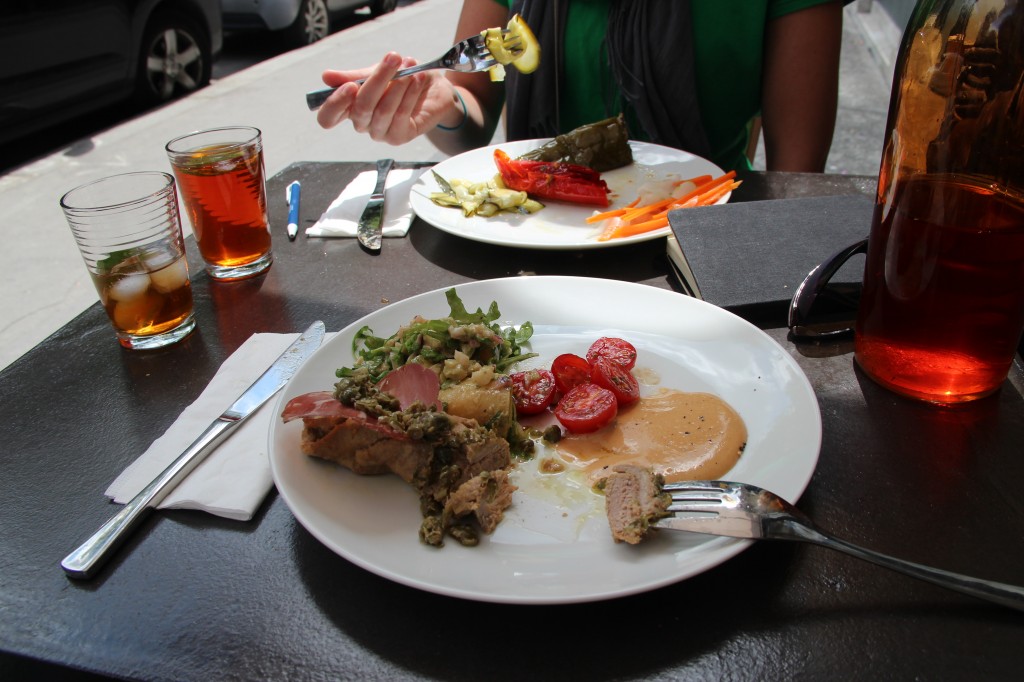 After a failed attempt at going to see the catacombs (they stop letting people in at 4…we got there at 4:09), we headed to Notre Dame. We noticed a sneaking line around the side of it and jumped in it, not exactly knowing what for. I ran around front and saw the masses pouring into the Cathedral, no line at all. But this line was to go to the top. Over 400 spiraling steps up.

After a bit, we made it to the front of the line. Luckily, Bailey and I were at the front of the group (they let in about twenty at a time) so we didn’t have to slug up the staircase at .4 kilometers per hour. Instead, we decided to run it. Yes, run up the 400 stone stairs.

And so we did…three-quarters of it at least. There was a landing a little after stair 320, and we had caught up to people from the previous group still making their way up. But it wasn’t long before we were at the second-to-highest level, with a gargoyle’s eye view of Paris. 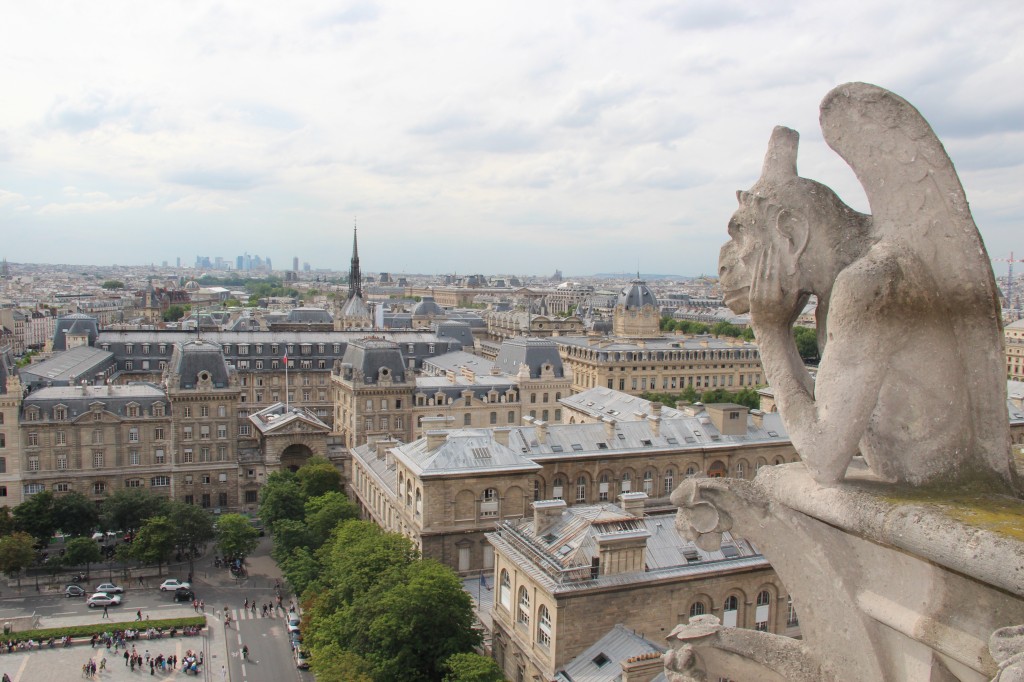 We slipped through a wooden opening and up some more stairs, wooden this time, to the Belfry. I envied Quasimodo for the rafters above the bell he could climb all day.

We went back down and joined the queue to actually enter the cathedral. A few minutes after we were inside, an organ started playing. I whispered to Bailey, “I think mass is about to start, do you want to go?” She nodded, and we went to find seats. The priest’s voice echoed powerfully, and with a resonance I recognized of Catholic priests previously. The rhythm to the words was the same, though this mass was in French.

This was the first time I could recall attending mass in a Cathedral (the mass at the Vatican a week ago had taken place in front of St. Peter’s), and it was beautiful. 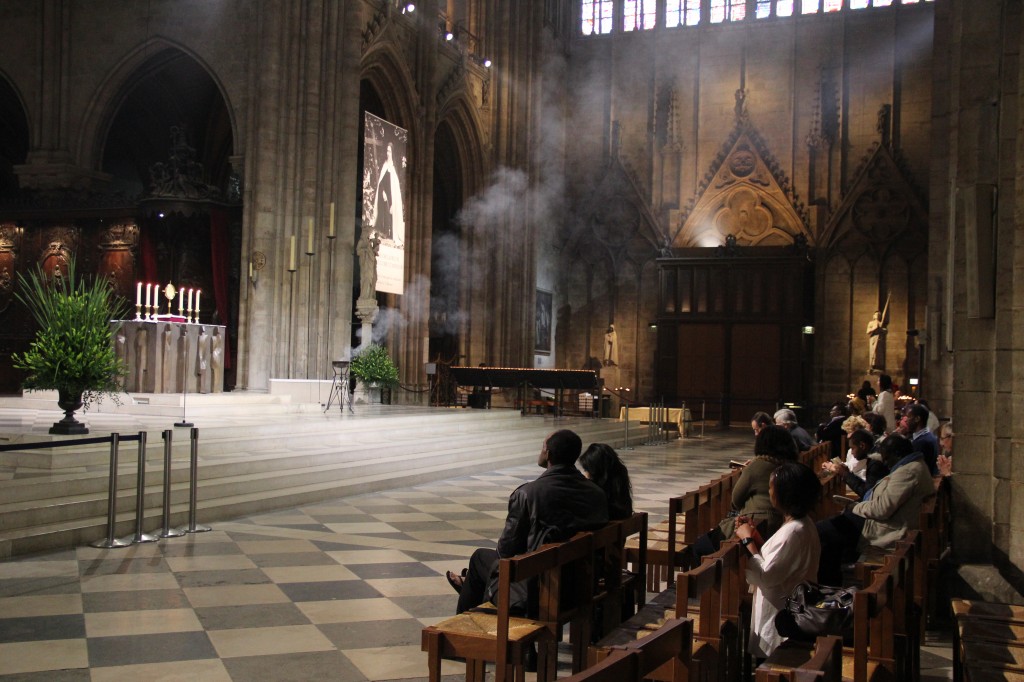 After mass, we caught a train to the Eiffel Tower. Or ‘iron asparagus’, as Bailey called it. Apparently, everyone hated it when it was put up, but decided to keep it up when they put it to use by adding a radio tower to the top of it.

Honestly, we weren’t about to wait in that line. Or pay 4.50 to hike up all those stairs. We’d done that, and on top of something a bit more aesthetically-pleasing and made up of a bit more than a hunk of metal. But I took pictures from below and we went to eat nearby. 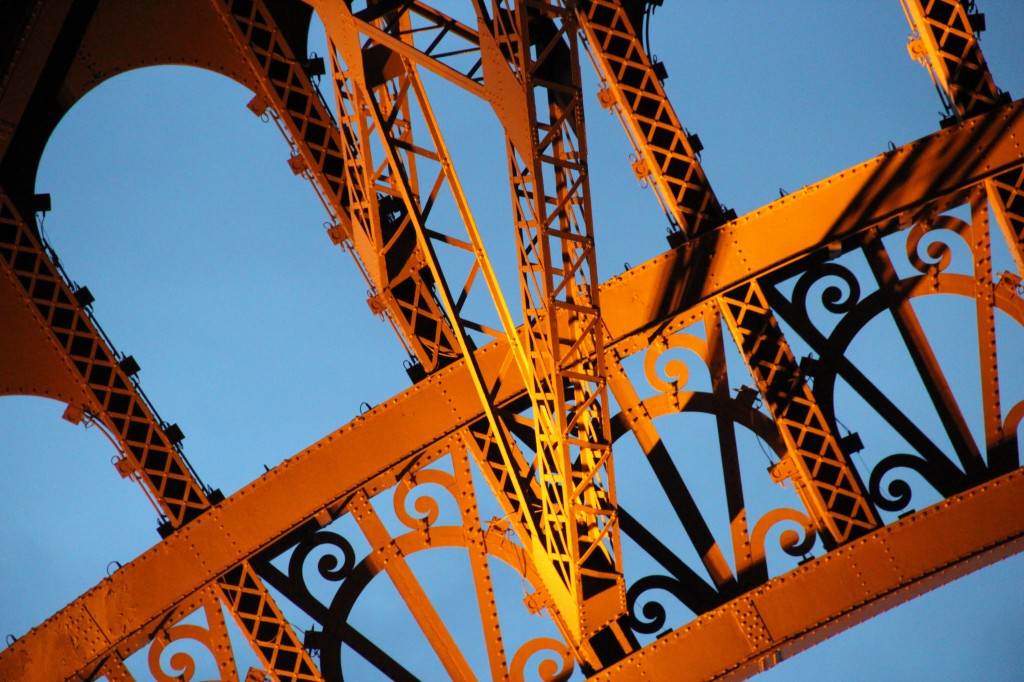 Of course, everywhere close was bound to be expensive, but there was a slight deal on a starter, steak, and a plate of cheese or desert. I had to get the escargot, steak sirloin, and fromage. With a glass of wine, as well. 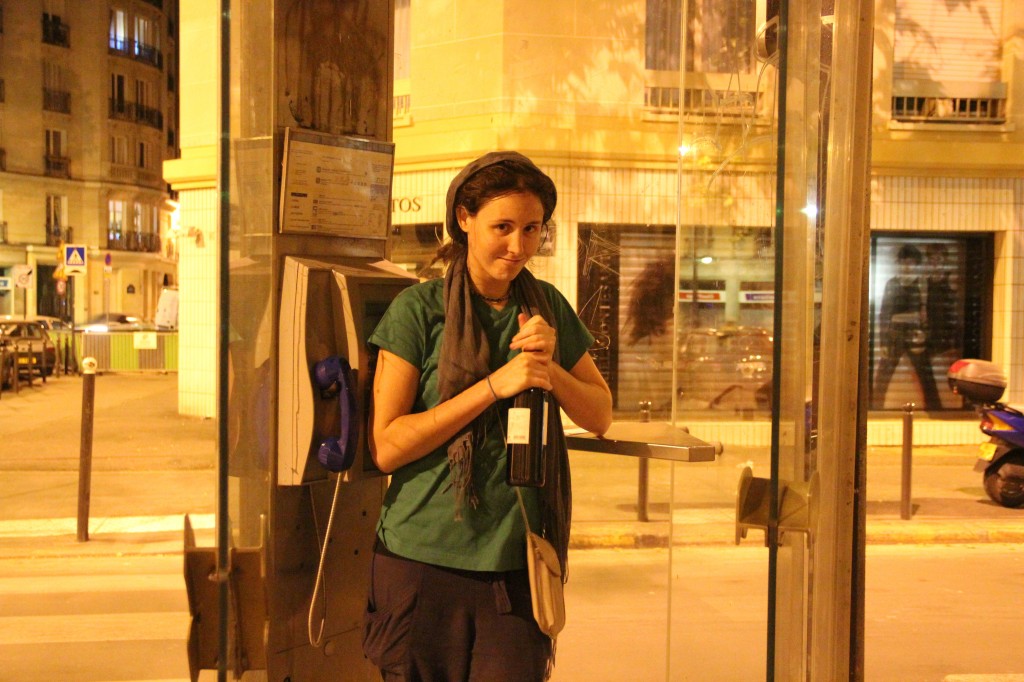 We only got tiny glasses though, because of the expense. We decided to go get a bottle someplace not that expensive and walk around. It grew dark, and we didn’t know the laws in Paris about open containers on the street. Bailey had a park in mind, but the only park we passed already had three packs of guys in it, we decided we needed our own turf. We wandered a bit, and found a pile of junk in front of this awesome piece of graffiti. We sat, and drank wine. 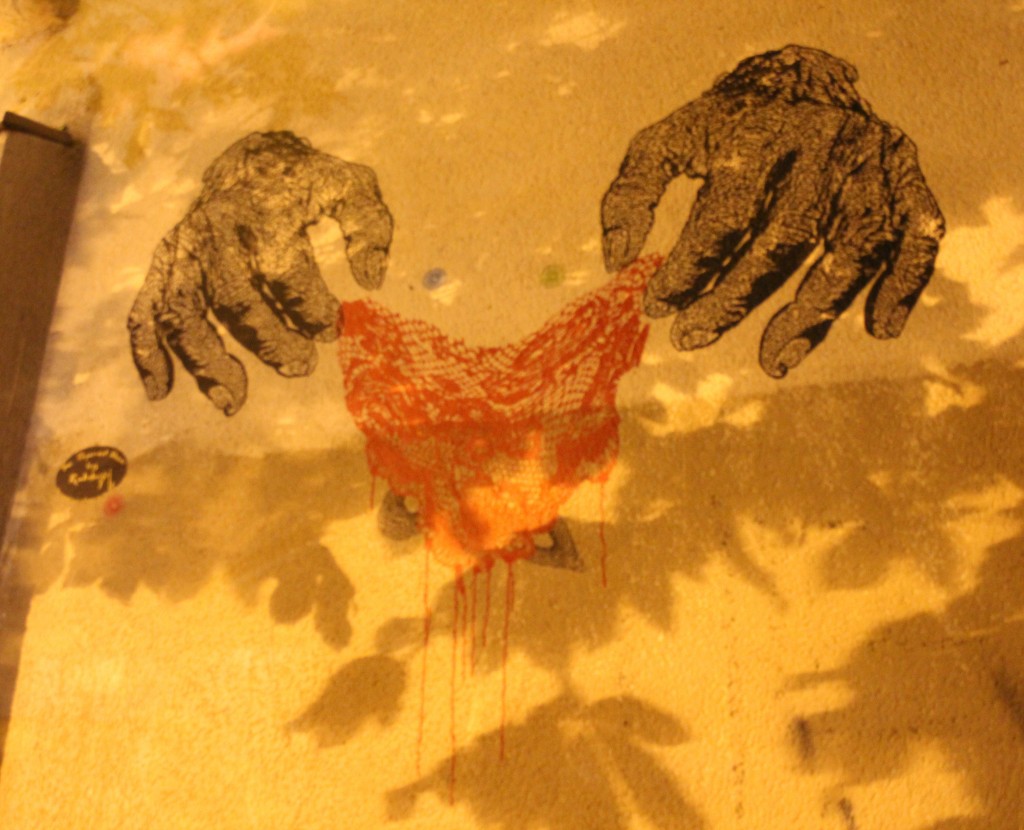 The next morning we awoke and went straight to the Catacombs. 6 million people buried in what used to be quarries. The bones were moved from other cemeteries (the Innocents one, mainly) due to health concerns. A spiral staircase down to these, as well.

A moist and musky labyrinth of bones awaited us down there. The tunnels were dimly lit, and the bones stacked to head- height, higher near the back. They checked our bags on our way out to make sure we didn’t steal any bones.  Honestly, I’m sure it would be the bee’s knees for some ‘goth’ high school kids, but to me, after the Bone church in Prague, it was rather boring. The sheer number of the dead people an eerie atmosphere is all it’s got going for it.

Back up on the street again, we bought crepes, a nutella-banana one for me, and then headed to the Louvre. We walked for hours, particularly in the Egypt section, but we walked all through. 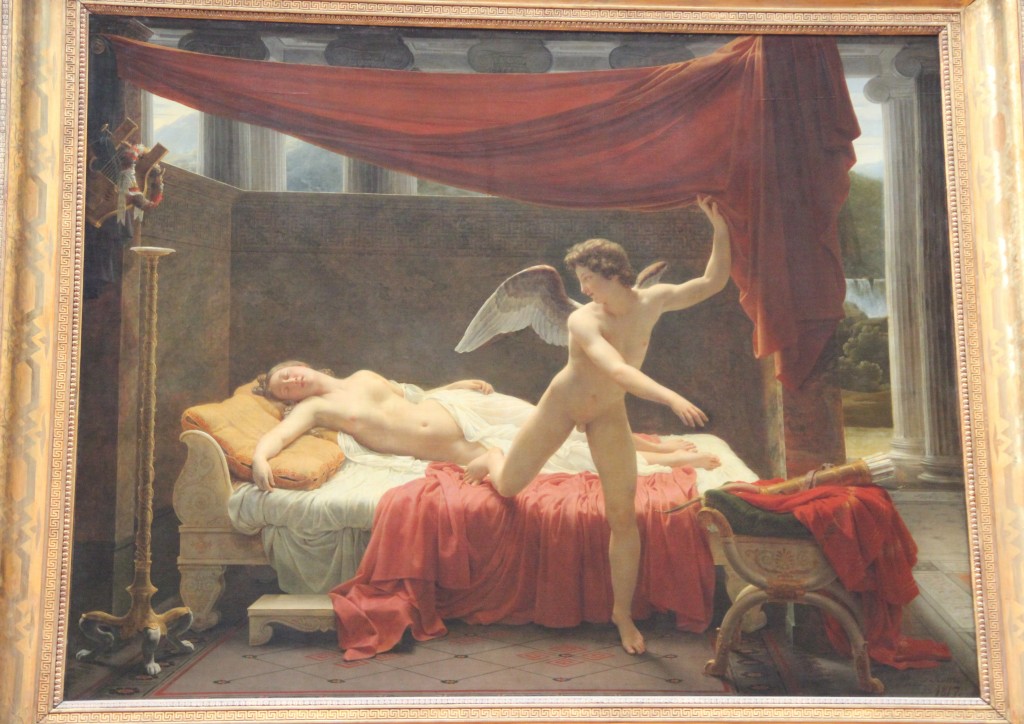 Afterwards we caught a train to Sacre Coeur Basilique… which was on top of a huge hill where you could also see the extensive city of Paris. The weather was all gray though, so it wasn’t exceptionally pretty.

We returned to the hostel to make our flight reservations to Amsterdam and caught the Ukraine-France match. We finished our bottle of Bordeaux and went out for crepes, again. This time, I ventured a fromage jambon (cheese and ham) and it was actually quite good. By this point, neither of us could understand why we can’t find decent crepes in the U.S.. When we returned, the Sweden-English match was on (English 3 to 2). 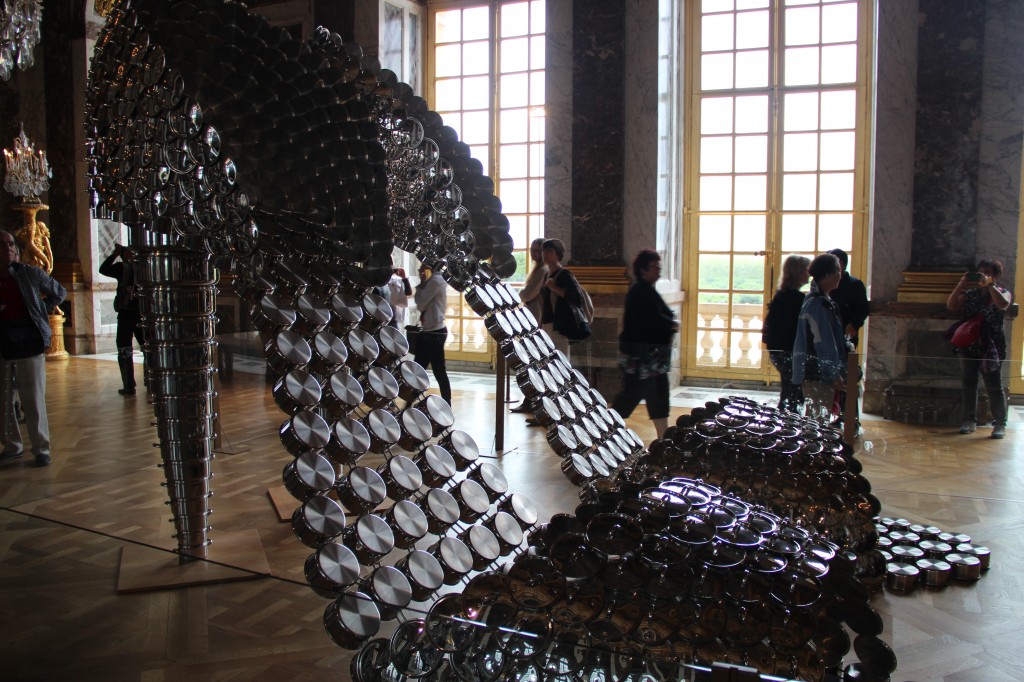 We awoke early and caught a few trains out to Versailles, a gaudy mansion with surprising modern art pieces selectively placed around the palace. These I liked, but the repeated gold-only color scheme grew tiresome around room 23. It was raining, so we glimpsed the gardens before bailing back to pick up our bags and head to G

Nord to catch a train out of town.

We discovered, too late, that the Eurorail passes do, in fact, 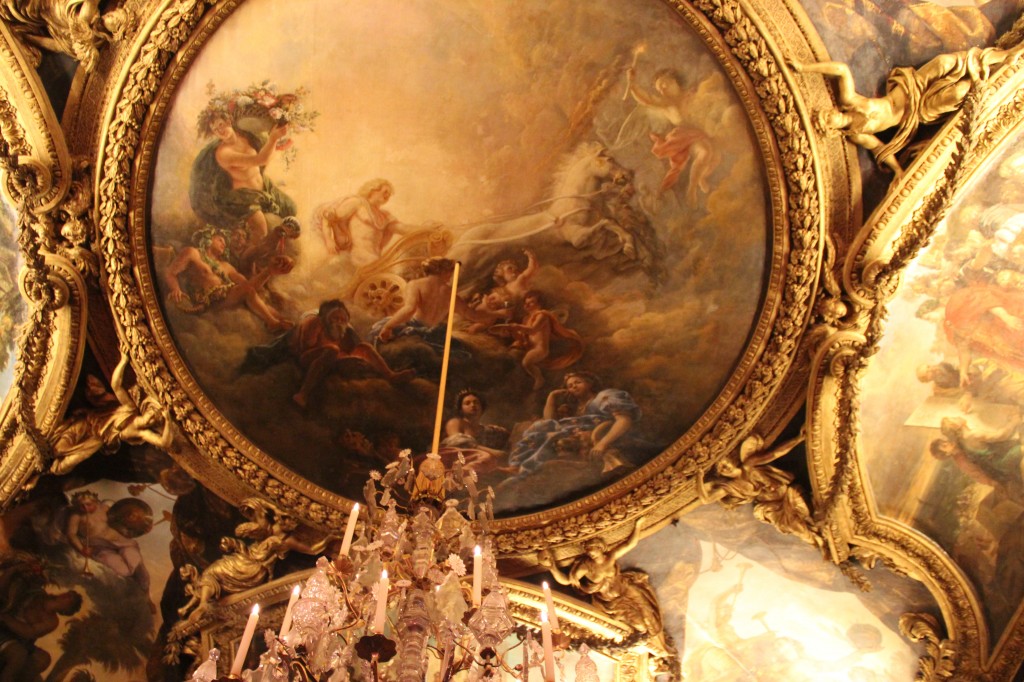 work from Paris to London. They were all full today though, so we’re headed to Calais now to catch a ferry across the English Channel, and then catch another train into London. 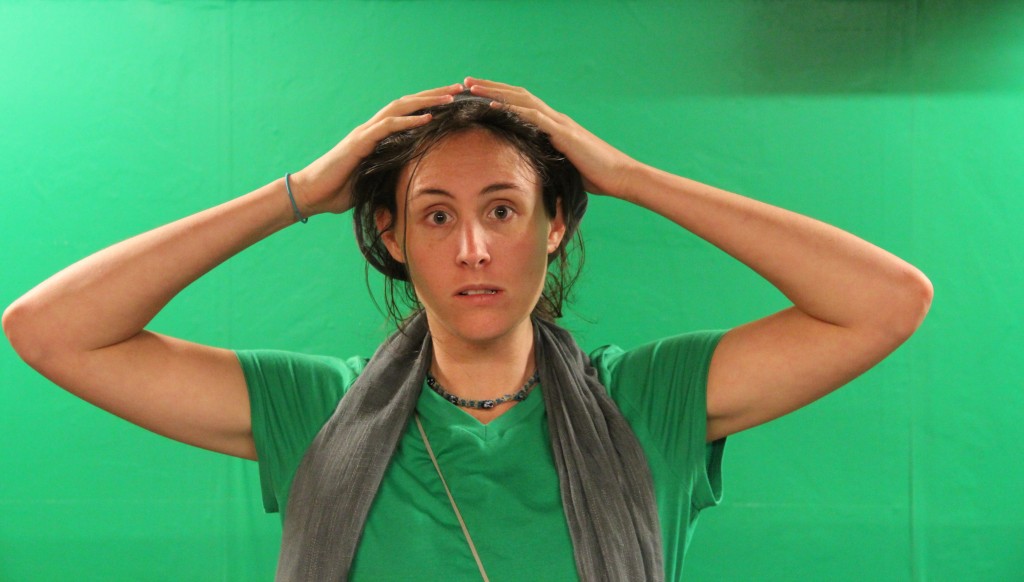 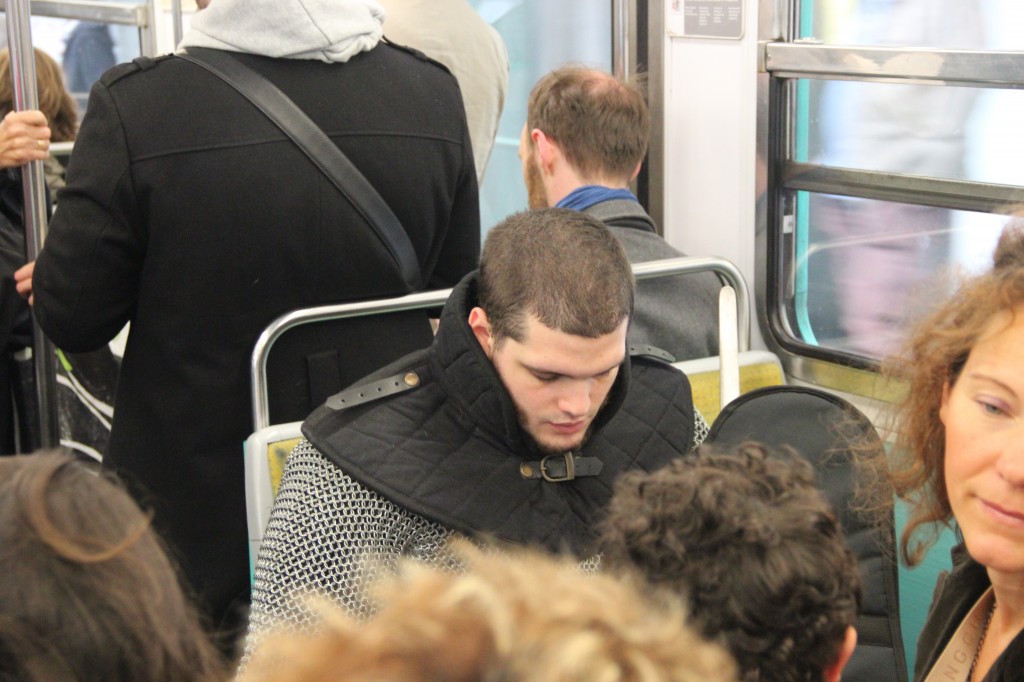 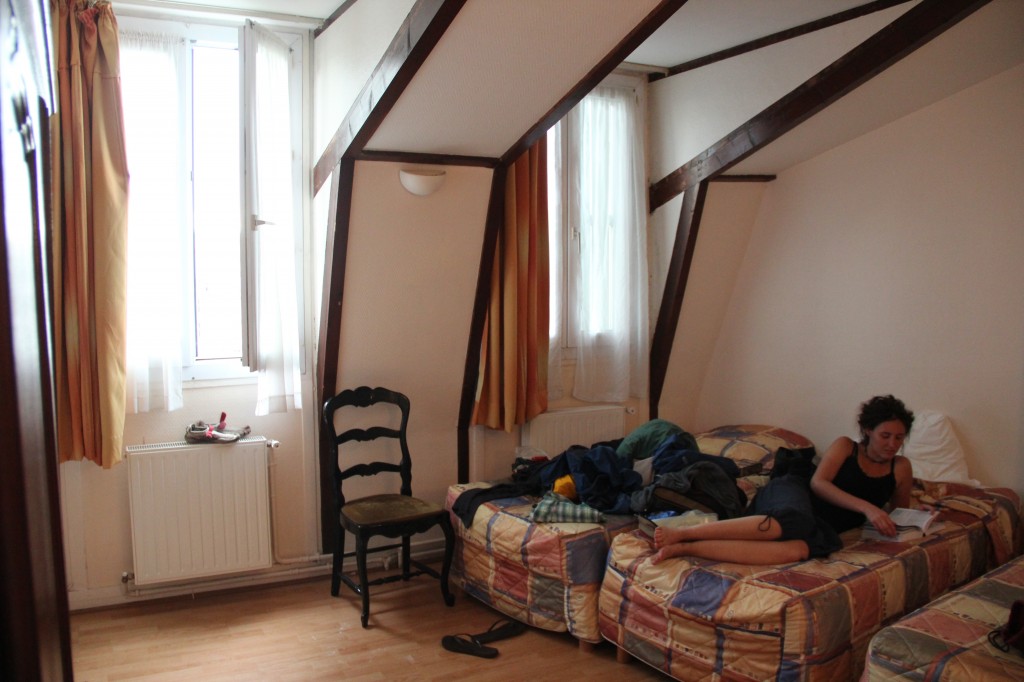 Travel Journal Excerpt: Currently sitting in Au Rond Point, with a glass of red wine and awaiting a plate of fromage(assorted cheeses). Oh yes, and escargot.

We arrived at Gare de Lyon this afternoon and(after scrambling around a bit searching for internet to rediscover the hotel we’d booked..) we took the metro to Gare de l’est. Our exit led us straight to our destination, the Amiot Hotel. We were getting situated and all that, and I had these lyrics in my head that I kept singing, “We want the world and we want it now.” 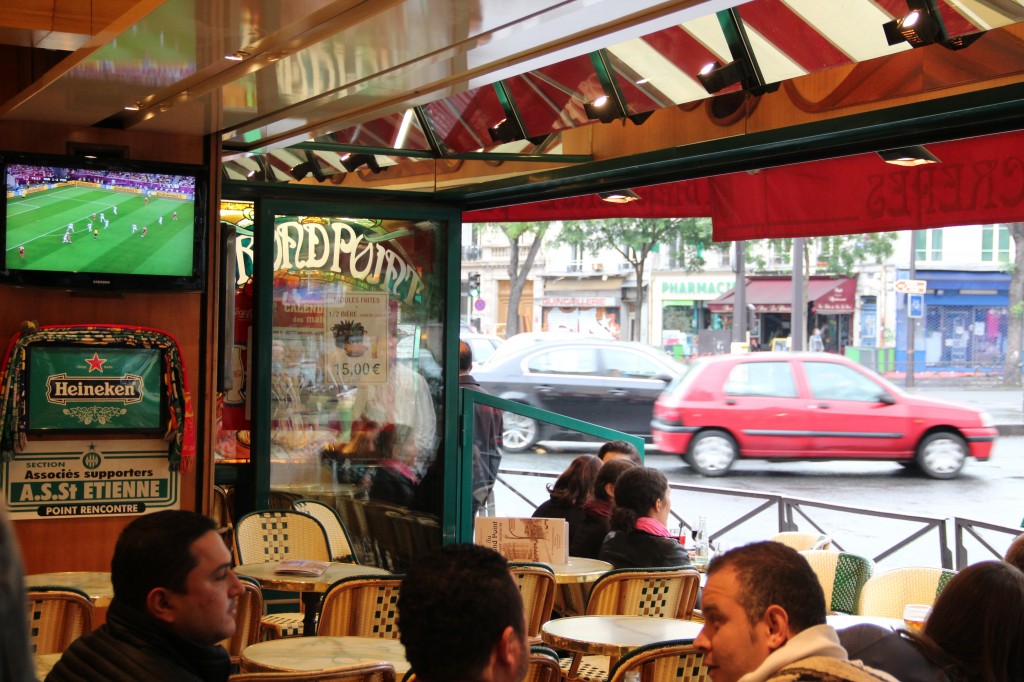 Bailey discovered that Jim Morrison’s grave was close by, and I said let’s go.

It wasn’t until we were in the cemetery that I realized I’d been singing the Doors(When the Music’s Over).

A few others were there when we found it, the Light My Fire in red stood out on the side of the grave in front(I don’t know if it’s PC to call them ‘graves’..?) A girl asked me for a light, but I didn’t have one. Someone did, and she had this lit white candle. 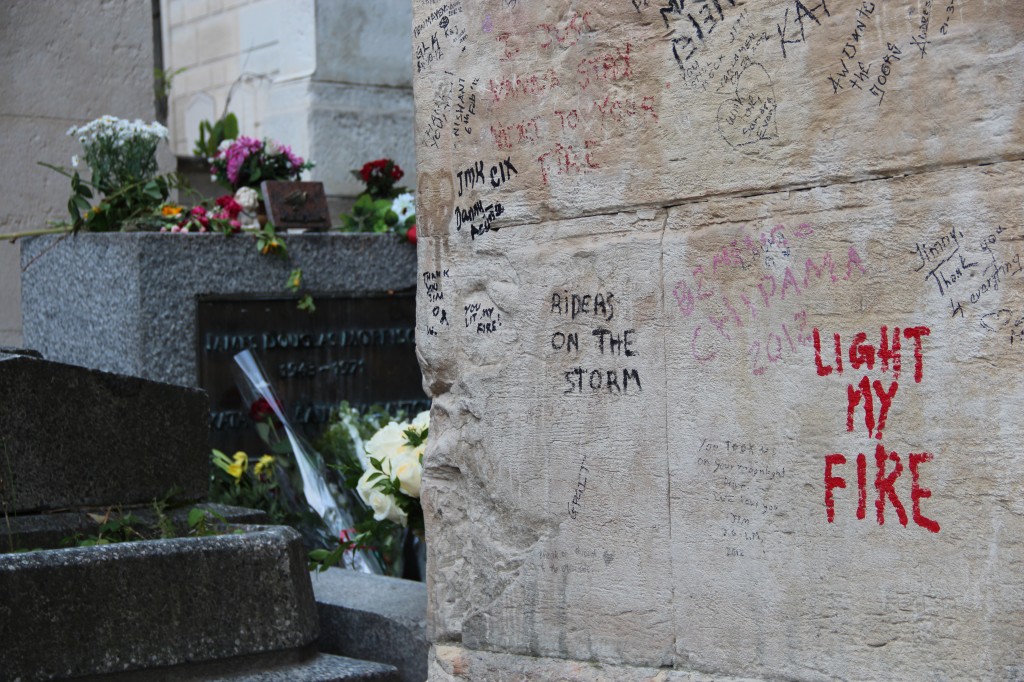 I asked if she wanted to put it on the grave, and she said “I want to, but I can’t climb over the fence.”

“I can.” My legs are so long I hardly had to try, but I was over, and I took the candle over to his grave, but there was no where to stand it. I started gathering rocks nearby to create something, and another girl joined me and dripped some wax on the grave to help stick it there, and then another joined, and together we made it work. It was beautiful.

The escargot surprised me with how much I actually enjoyed it. I didn’t even cringe. Maybe it was just really good escargot, but I think I prefer it to oysters and clams. The cheese was not bad either. I was watching the Denmark/Portugal match(Portugal won 3-2), like most of the people there, while the American girls sitting behind us discussed sex and orgasms loud enough for anyone in surrounding-table vicinity to clearly hear. It was as if they didn’t think anyone could understand English, but the objective was probably directed at the Frenchmen who –could- understand English, and wanted some blond loud sex girl to take home. No takers, the men just wanted to watch football. Perhaps the amount the girls inserted the word ‘like’ into a sentence made the very detailed conversation a little less explicit for someone who’s first language isn’t English. Lucky them.

The conversation went on the entire time we were eating.

We caught the metro back to the hotel, as it was raining. (We can see the Eiffel Tower from our room!)

Later we went out for crepes and grog(mulled wine…not my favorite, I discovered). I had a nutella-banana crepe, naturally, and Bailey had a honey crepe(also, naturally). They were delicious, and to accompany them – football! The Netherlands/Germany match(Germany won 2-1).