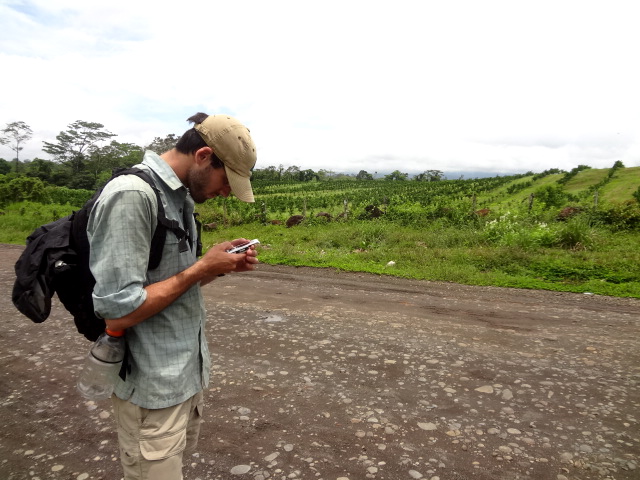 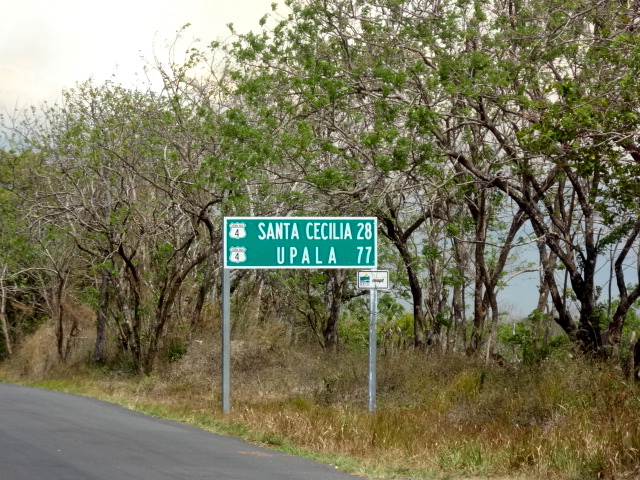 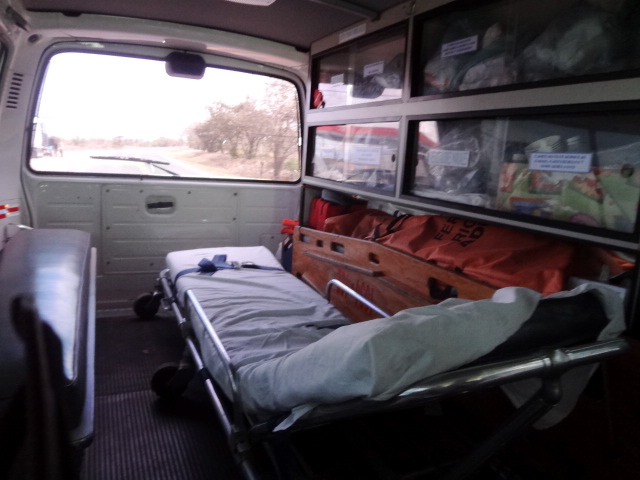 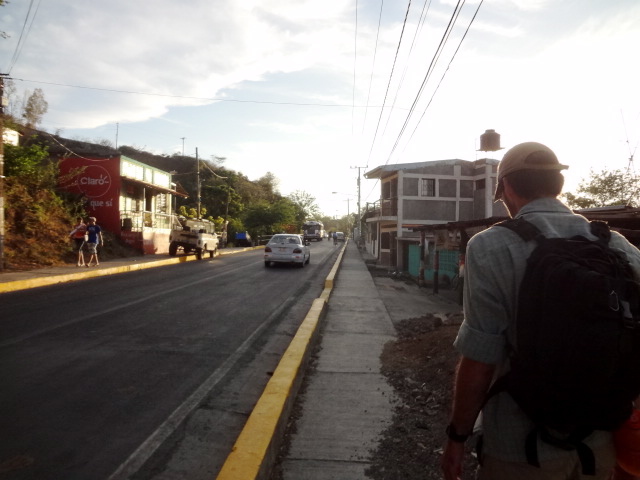 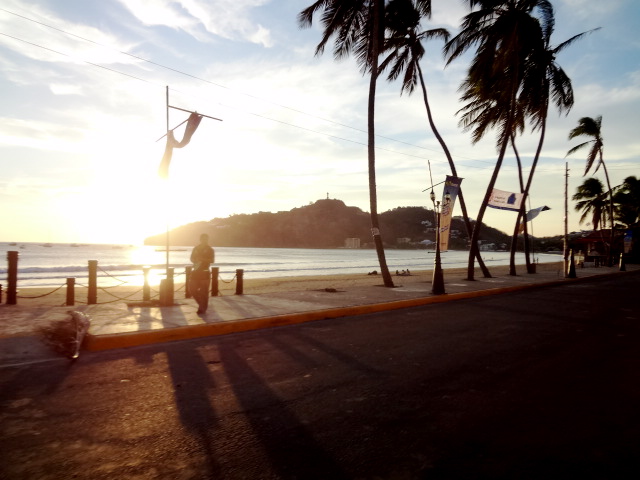 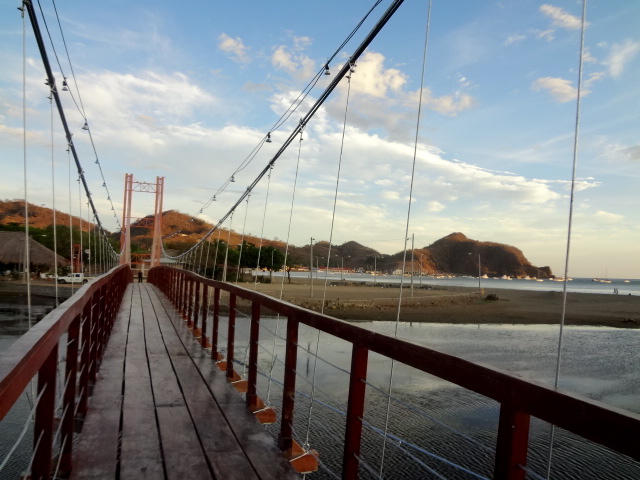 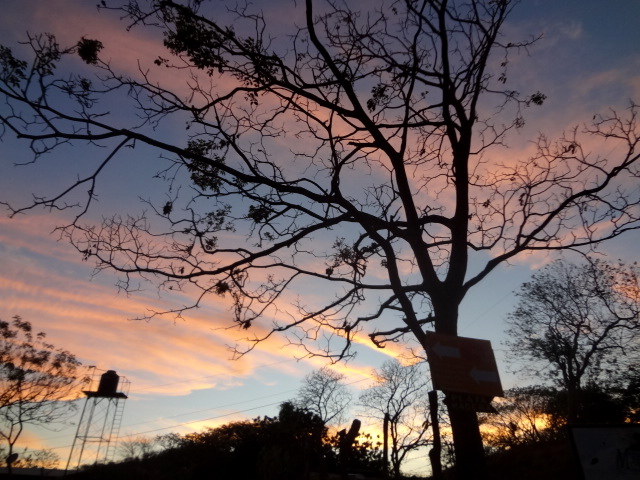 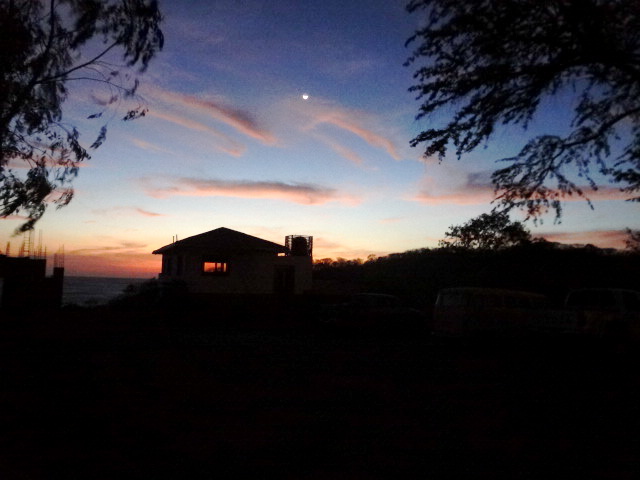 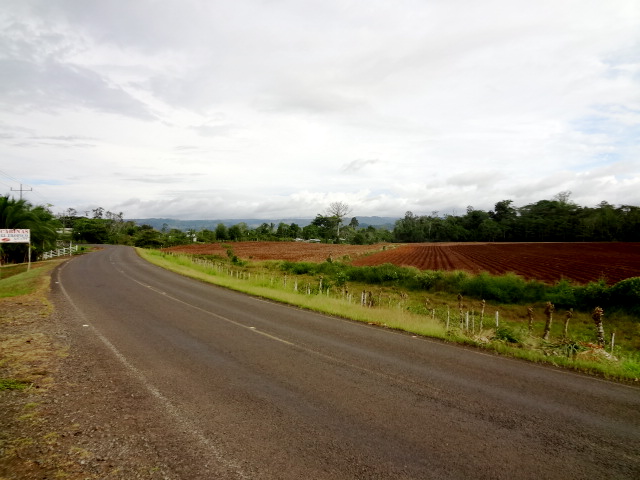 The day’s journey was not over yet. We still had to make it back – somewhere – before nightfall. Getting a ride down the mountain was easy, though a little uncomfortable — we were in a nice, rented SUV and we’re pretty sure the couple in front were whispering about how we stunk… the sulfuric aroma of the hot springs didn’t do too much for the clothes we were sweating in all day to get there. 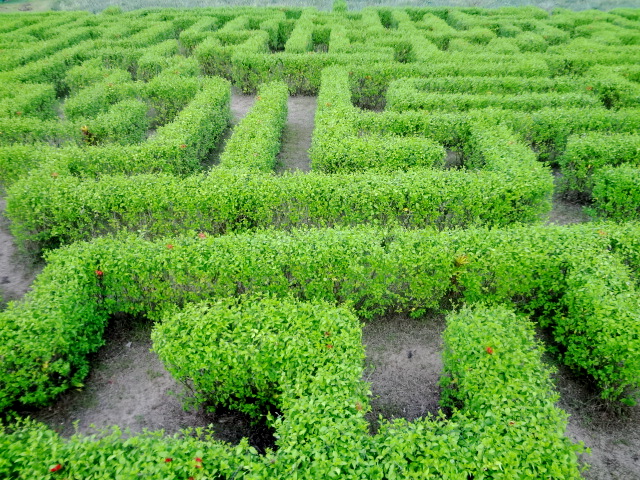 They took a different route down the mountain than the one we took up. They didn’t know where they were going either, but the route was much longer this way, and put us much further from Upala…

They dropped us off at the bottom of the mountain, and we set off down the road again. 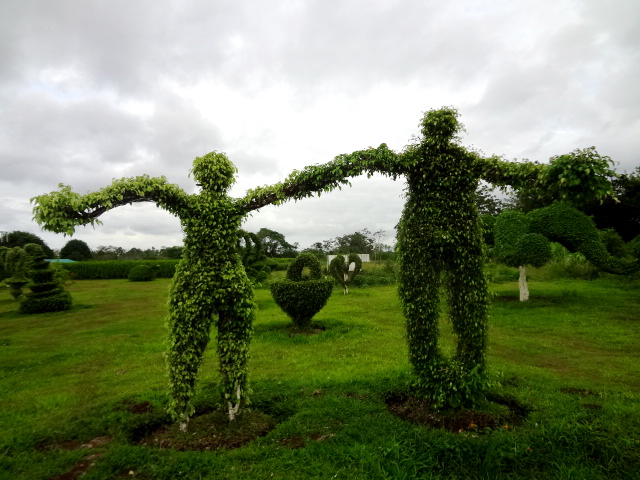 We stumbled upon a hedge labyrinth, and a bunch of carved plants shaped into all sorts. It made having to walk right past it just that much more worth it. Whatever it was, it was pretty neat.

We got the best ride ever from two young guys in a two-door yellow jeep. The wind beat against fabric over us in the “back seat,” as the driver drove like he was racing seconds against the gas pedal and conquering the wind in Spanish to keep up their conversation, which didn’t slow even when they picked us up.

And we were back in Upala again.

We trekked to the northwestern side of the town and tried to hitch out, but the sun was setting and the dark came quickly. It was too late. We were stuck in Upala, Costa Rica, for yet another night. 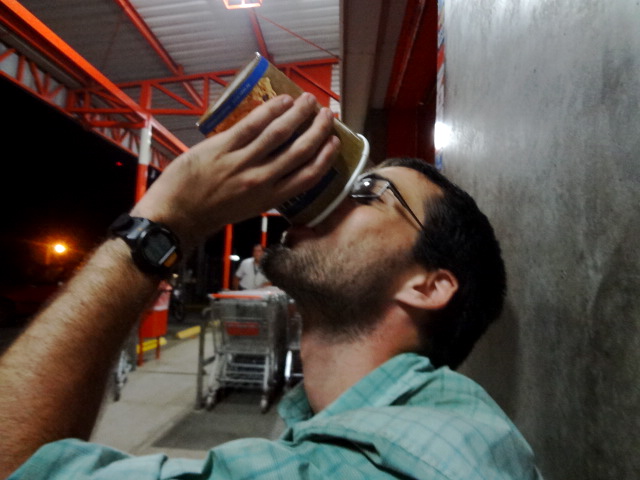 So we bought a tub of icecream and killed it cinco minutos. 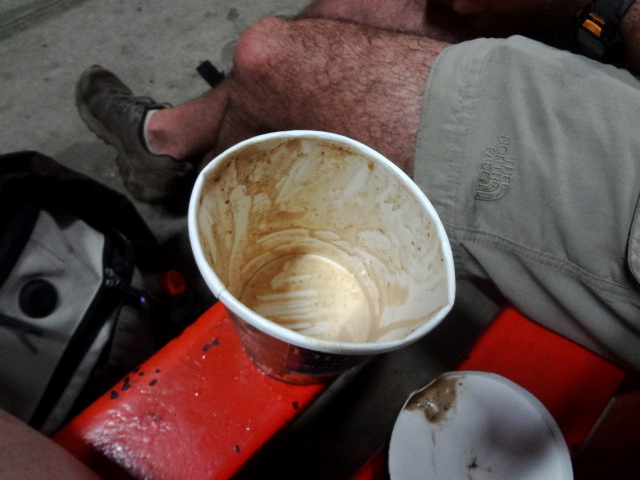 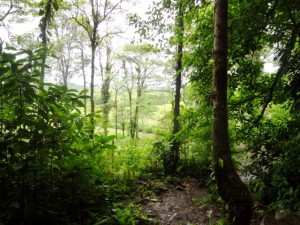 We ran into the rest of the group the next morning, Upala isn’t a very big town. We set our destination as some waterfalls nearby, and set off on our route of unconventional transport yet again, walking as we saw them board a bus and roll away.

This time, though, it was a race. We knew it. They knew it. 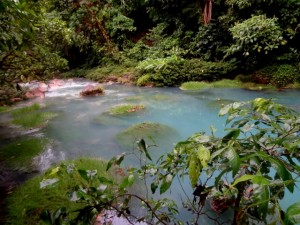 Things were looking pretty dreary for a bit on our end. For one, we weren’t entirely sure where these mystical waterfalls were, and for another, it seemed like no one was out and about on rainy days — or at least, the ones who were didn’t want soggy hitch-hikers soaking their seats.

We eventually made it beyond the turn off point up the mountain. So we had to hitch back, and then forth again. Not everyone knew where these azul waterfalls were, so they’d take us to the turn off of where they were driving, cool with the company, and we’d not really have any clue how far off we were.

The rain stopped, and we made it off the main road. The azul waterfalls were up this mountain, we were told, we just had to follow the road. And so we began.

The roads had been fairly flat before, but after a few kilometers the slope of this one seemed to increase with every step. We walked up, and up. And up. 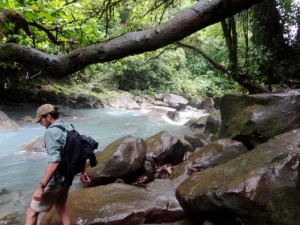 Vehicles were scarce on this road, and when a pick-up truck did happen to drive by, it did not stop. We reached a point that hurt just looking at it, looking straight ahead would mean looking at the road’s incline in front of your face – that’s how steep it was. And finally, someone stopped for us. We got in the back of the truck. These guys were booking it, too.

At one of the steepest parts, we see a group of people off to the left of us — it’s the rest ofour group! Jeff starts running up the mountain after the pick-up truck. So close! We ride onwards.

Not to endorse schadenfreude, but Mike and I were pleased with our timing for this one. If we had taken the bus directly to the bottom of the mountain, we would still be clawing upward, rather than cruising up to the finish.

We made it, we won, we wondered through the rainforest. We zigzagged bridges of pure blue water, and hiked up to the azul cascada. Natural minerals cause the blue color of the water.

The other group finally made it, too, and we relaxed in the natural hot springs. I jumped from the cool water to the warm, and reverse, to get the full spectrum of experience from this magical river. Mmm, rejuvenating.

The backs of pick-up trucks aren’t the most comfortable, but they’re fun. And provide an excellent view. 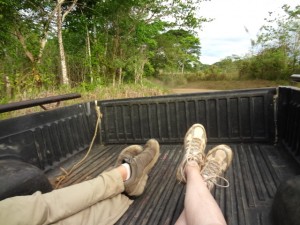 This was the first time I’d ever hitchhiked. The folks who picked us up were probably doing it more out of curiosity than anything else.
Why the hell would two Americans be traveling this way? 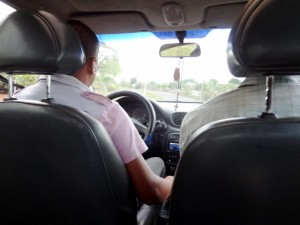 but Mike’s was good enough to get us further along when someone did stop and ask.

We made the mistake of telling someone 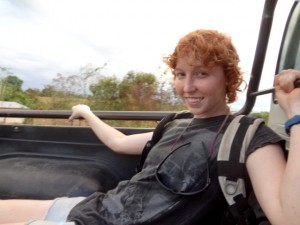 our destination was a town on the way to Upala, to break up the distance and make it seem less of a drag. He took us there. We got out and saw him turn right. Right down the road toward Upala. 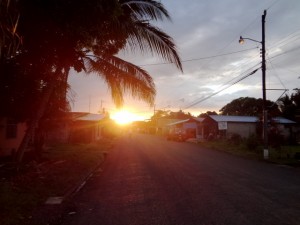 It was a bit before another driver headed that direction with us.

As the sun set, we rode into Upala.

We made it to shore and took a smaller boat through a rainforest-enshrouded waterway into Costa Rica. The seven of us wandered around the village a bit debating where to wander next, eventually settling on Upala. 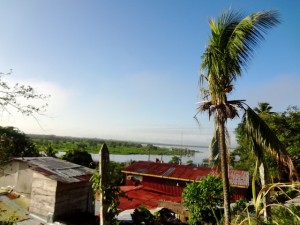 Mike and I decided we could get there without spending the córdoba on the bus fare. He took out his phone and took a picture of the map. We started walking.

A few kilometers down that road and another, we learned people won’t stop if you’re still walking. Turn toward them, and you’re more likely to get picked up.

Our backpacks were school-sized, the weight was in the water. The landscape was flat and dry. Sand, brush, heat. Crumbling street beneath our feet, clay-colored. The smell of sunscreen and sweating dripping, foreboding red and peeling skin. Wheels turned hope, but not always rest.

As dangerous as people say Nicaragua is, the real concern was hydration. We didn’t stock up once we decided to take an alternative form of transportation. The uncertainty in the timing of our arrival at the next town paralleled the uncertainly in the next time we’d see bottled water.

The road was deserted for kilometers. 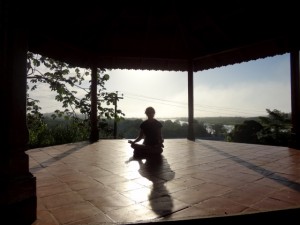