I walked into 1982 at 5 o’clock Friday without any idea what to expect (or mentally prepare for…). It was a press conference, I’d heard, for the variety show: The Reverend Angeldust’s Tabernacle of Hedonism with your Host, Tom Miller! which starts Monday, January 21 at 9 p.m.

People aren’t always thrilled to see folks with cameras around them, but at this -press conference- it was like I was something special! Appreciated, even! So I took that as welcome to snap as many photos in that dim-lit bar as possible, praying to that great Dumpster Goddess, Jamba, that one (Oh please, Jamba, one!) would maybe turn out bearable. See in the Tabernacle, Jamba is the pray-ee (the ..er…’being’ whom is prayed to). 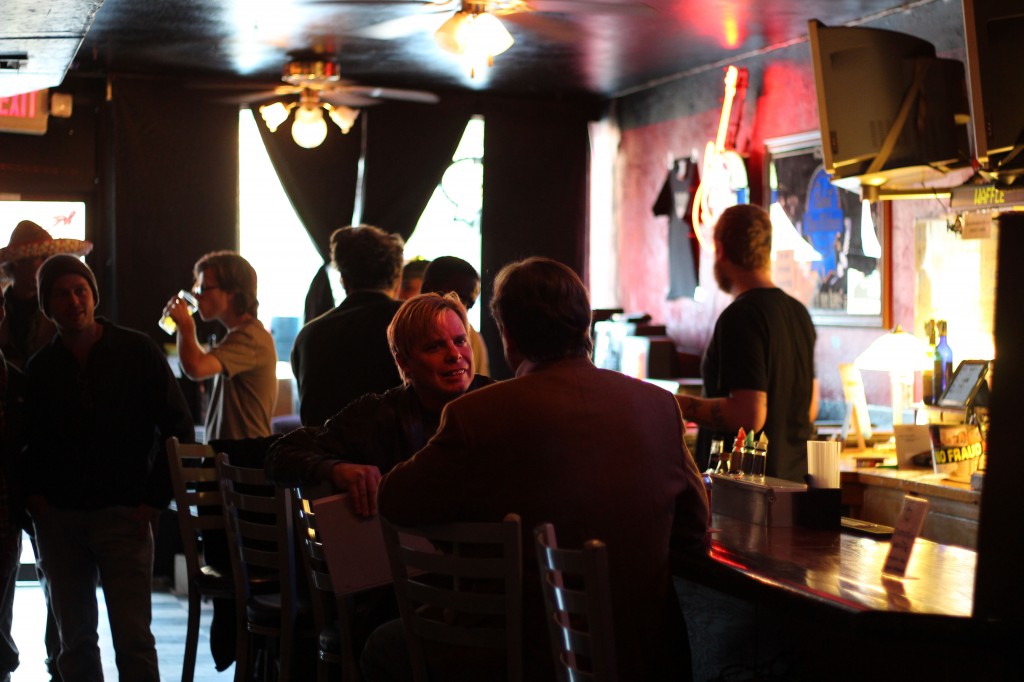 The RATH is Gainesville’s newest religious institution as of Friday, January 19. The Tabernacle of Hedonism is the ONLY variety show which is also a recognized church (–that I know of), and also an incarnation of “The Tom Miller Show,” the longest running variety show in Gainesville.

I milled about as others milled in, and Tom Miller stepped up to the stage to introduce the other present Secret Council of Society Deacons, Daniel T. Ballard and Mike Garvin, they decide who performs. And then, the Reverend Angel Dust himself, the spiritual leader of the group, stepped up onto the stage to sermonize.

“Do only that which is RIGHT!”

The last member of the Secret Council of Society Deacons arrived and stepped up on the stage, only stopping brushing his hair to hold up the certificate which certifies that he, James Wesson, is an ordained minister. Each Society Deacon is, in fact, they signed one up right there in 1982 via the wonders of the internet.

It included a legit Q & A session like legit press conferences and all, the energy was up. I asked a few questions after the gig.